Saturday came !!!!!
It's time to diffuse original Vocarock as every week !!
This is the 4th song, it's about "SAKURA (cherryblossom)" that is birth flower of April.

And this song was the opportunity that I found album concept.

I don't know if you noticed but I didn't draw SAKURA in LUKA's character illustration.
Because I've decided that I put SAKURA petals in background of the whole illustration so I didn't let LUKA "wear" SAKURA.
(She wears other 3 flowers) 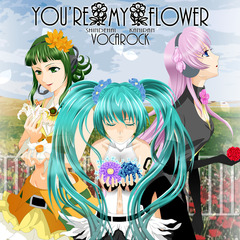 That's because SAKURA is birth flower not only for April but also 1st April. And this is birthday of SHINDEHAI.
He is the producer of this album, so I thought that it's good to use it as background.

And normally we write 桜 as Kanji of cherryblossom but this time I used "朔(SAKU)良(RA)".
This word doesn't exist actually. So this is new word. Original word.

I've participated STTARYSKY's album before, and at the time, I wrote a lyrics and named the song "朔夜(SAKUYA)".
You can read about it here.
I made 2 title 朔夜 & 朔良 and finally 朔夜 was chosen as you know.
So this time I used "朔良" that is not used at the time ! This is recycle !!!! XD

And there are some Kanjis that can be read "RA" but I chose "良".
This means "Good".
So there is not the word "朔良" in Japanese but this can mean "Blooming well in the 1st day".


By the way SAKURA's flower language is "beautiful mind".
This is abstract word. I needed to think about definition of beauty at first.

I introduced cherryblossom in JAPOKANI.

And I talked that I like "when cherry petals are falling down", I feel it beautiful.

I wonder if SAKURA know that they will fall.
Or they don't know it and fall without knowing it until the last.
Does It need to fall to bloom again? Because they know that they will bloom the next year.
But there is not really "again".
Because "the flower" is the flower not another flower.
Even if same tree, all flowers are not a same thing. There is no exactly same flower in this world.


Human knows that they will "fall" someday.
While people are living, they must know it at some timing.

So everyone of age above a certain level knows that they will fall someday and
they must think how they "bloom" living.
And under this situation, I think that it's beautiful that they bloom majestically knowing their ending.
In addition, in human society individual is respected even more than "flower society".


Cherryblossom blooms and falls soon. We feel it profound and superior.
When we imagine that SAKURA know that they fall soon and that's why they bloom dignifiedly, it looks even more superior.
I remembered a song "A flower and a gentleman".

This flower knows that she will falls soon.


The song says that :

When I kissed small flower, she said me that I'm a gentle man and asked me to pick her up and take my home.
She said that she would bloom hard in my room and encourage me.
"My life is short anyway, so please look at me until I fall"

Everyday I returned to home in a hurry and talked with her so much.
One morning she fell remaining her prettiness and being still small.
As I promised I've been looking at her until she fell.


But people don't think that they will fall "soon".
They think it's "someday" and it means "far future".
So people don't consider about "blooming dignifiedly". To be lazy.
But when the time to fall come closer, temporal sense changes, then they start to feel as if they fall SOON.
Suddenly they feel as if time since they were born until now was short .
It's too late. Because maybe they had lost many things because of their laziness.


In a sense flowers can bloom hard because they don't know falling.
But flowers like that would say "If I would know that I fall, I'm sure that I would bloom more neatly"

So if the flower look at a person who don't consider about his way to BLOOM well,
the flower think of him as too lazy that he is wasting time to bloom.

A person's life is short anyway, anytime.
Just everybody notice it when the end comes closer.