But I put main video here also ! So if you want to watch bonus, please jump to VoxmakersPlus from the link above.


I made a video about ORIGAMI this time as I said in last article !! ^^ (Oh but there is only Japanese article)
At first, thanks Japanese listeners who sent me ORIGAMI photos for this video !! And especially thanks to my friend PENTAGON who cooperated about shooting video.

He brought many books and he talked about ORIGAMI so much. It was valuable meeting !!

Of course as he says, there are many people who know about ORIGAMI and make ORIGAMI arts better than him in Japan, but he is the only person I've known who can make difficult ORIGAMI.
I think I have a lot of acquaintances. But there is one person (he) who can make difficult ORIGAMI and knows well about it. So probably it's difficult to get to know with person like that now in Japan. I felt there is not many people who know well ORIGAMI.

But actually ORIGAMI is Japanese culture. Traditional culture, you know. And it's a ART also.
ORIGAMI is not only hobby for all people (from young to adult) but also art.There are some artists about ORIGAMI who make new ORIGAMI recipe and inherit the culture. Rather there are some foreign ORIGAMI Artists who give a lecture and workshop in foreign country.


I felt there are few people who do and know well about ORIGAMI in Japan, even though ORIGAMI is Japanese culture. In a sense it means that only few people do it, so it became ART. But I felt that Japanese people (including me) know too little about ORIGAMI. I think they may know it more, even if they don't it. Because I discovered many things this time. So even I studied many things about ORIGAMI making this JAPOKANI GAKUSHŪCHŌ episode.


There would be many things that I talked in video already but I'd like to write about ORIGAMI here.

But if the thing that I heard is true, there are many children who can't make ORIZURU and perhaps it's increasing. In addition, I was taught like that but this was not common from the first, I don't know the truth though... Anyway almost Japanese people imagine ORIZURU when they hear "ORIGAMI". I think this is true. Or they imagine TOYO ORIGAMI. (the standard ORIGAMI that I showed in my video)

So I made a video let learn how to make ORIZURU. I think this is basic ORIGAMI with square paper.


If you understand how to make ORIZURU, it means that you learnt basic folding way. So when you remember ORIZURU, then you can make other ORIGAMI easily applying ORIZURU. That's why ORIZURU is basic.


Next, I made a video let learn how to make a simple box.


I made this box so many times when I was a student. Because at school, we use this as a trash box at lunch time. So I had to make this constantly.
I think that it's just way of thinking of Japanese people to make something as art or tool folding unnecessary paper. Usually people would throw away unnecessary paper soon. But Japanese people think of it as MOTTAINAI thing. MOTTAINAI means "it's still useful". Japanese people don't want to throw away anything soon. And mountaineers climb mountain because there is a mountain. Just like this, people fold paper because there is a paper, perhaps. XD This might be a human instinct. So this might be origin of ORIGAMI perhaps.


Then I asked PENTAGON to make or bring some ORIGAMI arts that he wanted to introduce to foreign people as a "ORIGAMI freak".

At first he made a DEVIL. It takes long time to make this. And this is pioneer of modern ORIGAMI. Actually it took 30 minutes to finish. So I used this as X10 playing.

Other topics :
[MIURA ORI]
[Haga's theorems] HAGA was a Professor about biochemistry of University of Tsukuba that is the university which I graduated from.
He is not only professor of biochemistry but also famous as researcher of ORIGAMI mathematics.
[Aesthetics of ORIGAMI] The most valuable ORIGAMI that is based on aesthetics is what can clear following 2 tearms
1.only 1 sheet
2.just fold (don't make any slit)

(By the way, my friend PENTAGON likes insects. Also HAGA is professor of biochemistry. There is any relationship between ORIGAMI and bio or animal !?)


About ORIGAMI and mathematics. There is question that can't be solved with mathematics but ORIGAMI can solve. PENTAGON brought some books about mathematics and ORIGAMI, but I couldn't understand anything !!!! XD I don't completely understand linear algebra !! 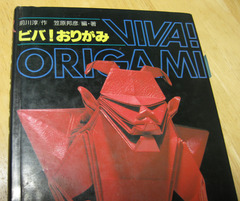 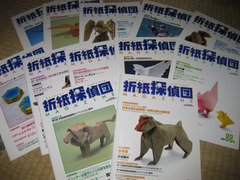 There are various ORIGAMI books not only related mathematics. Like above. "VIVA! ORIGAMI" is large book and it shows many "recipe". And the right side, this series is a periodical "ORIGAMI TANTEIDAN (detective team of ORIGAMI)".
And development plans are also interesting !! Here is the result of search on Google
This shows the line that you can see if you open some ORIGAMI art. It is already art only in this, you know. Sometimes there is a page that shows only a development plan and finished good in ORIGAMI TANTEIDAN. And the book says "Hey! Let's try to recreate this ORIGAMI with only looking at this!!" It's impossible as far as you're not expert of ORIGAMI ! This is like a game though. 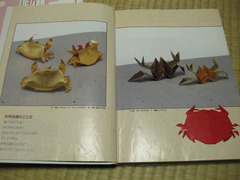 
Anyway ORIGAMI has been progressing than I expected. There are people who make ORIGAMI with wet cardboard in foreign country, but I think this is not ORIGAMI exactly. This is "NERIGAMI". NERI means "work (dough)".

And there is a sentence that says "ORIGAMI is sculpture of paper" but I think this is not exactly. Because sculpture is making a subtraction. At first there is a mass or lump of wood or stone and artist sharpen it. This is a subtraction. But ORIGAMI is not a subtraction and is not a addition. Never subtract but never add. Just use the paper as itself and make a "metamorphosing". If there is the Aesthetics of ORIGAMI, using wet cardboard is not ORIGAMI exactly, I think.

Don't add, don't subtract, just fold. This is ORIGAMI's major premise and I hope that it will be understood as itself. Well I know that Japanese people adopt foreign culture and arrange it as they like !! XD But I think arrangement can be done by person who is understanding the basic.


And if that (many children can't make ORIZURU) is true, Japanese people might forget their own traditional cultures. Then we should rediscovery our cultures. And it's gonna be more important thing that we can introduce or explain about it to foreign people. Now you can see that internet connects people all over the world. In this situation, if Japanese people can't introduce their own culture, it's like a person who can't introduce himself and make people's interest in him fade. Conversely, if he can introduce himself well, the first impression is good and he can get many chance to make relationships later. To do that, we must know ourselves, our culture. Then even if our culture would become "wet cardboard", we can still have the axis. If we would lose the axis, it might be too late to do something...


So I'm thinking that JAPOKANI GAKUSHŪCHŌ program have significance both of Japan and foreign country. If Japanese people are interested in their own culture and able to have confidence, a lot of people who appreciate it would appear and many interesting things would come. Ah but Modest is good moral that Japanese people have, so we should not be assertive too much though. On the other hand, I feel Japanese people too much modest ! haha ! I think the degree of attention from foreign country or foreign people is not low. So if we could introduce our interesting things positively, there would be a good effect on Japanese economy... I think.

Please be looking forward to the next episode !!! See you !!!